We’ve all fallen through the black hole that is Target. All sense of spending money is left at the doors for you to pick up on the walk of shame back to your car. Anyone who works for Target, I am sure enjoys so many people spending their hard earned dollars there, but what about the customers who love Target so much that they pretend to be Target? That becomes a public relations nightmare!

This nightmare will always be known as the time Target went rogue.

In August 2015, Target announced that it would be removing gender-based labels throughout the store. With the announcement came an overwhelming amount of angry comments as well. Shoutout to Mike Melgaard though for being there to assist Target with customer service comments on Facebook. 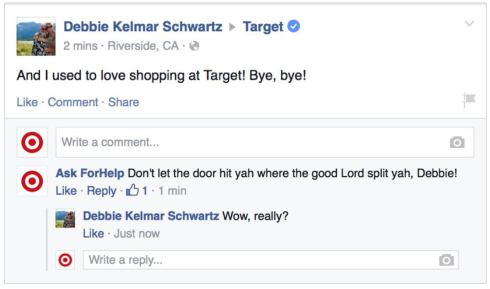 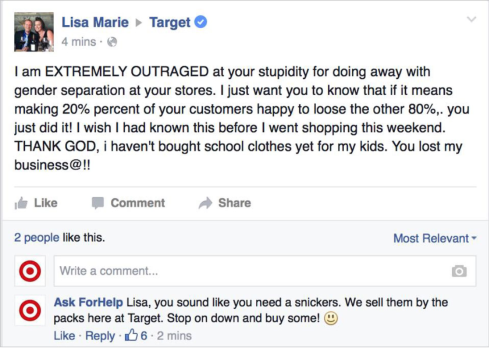 Providing comedic relief with all these negative comments, Melgaard only added to the headache. His creation of this fake Target Facebook account brought many laughs to me and national attention for the store, but I’m sure Target was not laughing when they had to unleash a crisis management team to clean up the mess.

Since we all know everything that is posted on the internet is true, Target was going to have to use their resources wisely to make sure that this didn’t blow out of proportion. The fake account was only up for 16 hours before Facebook shut it down. After the account was deleted, Target released a textbook statement apologizing for the troll account, and then just like that it was all over – though, people were still upset about de-gendering the store.

Before this minor crisis of a fake account, Target experienced a much more serious crisis – the data breach of 2013. An actual crisis that required an actual crisis plan. It is unclear if they had a crisis plan in effect at the time of the breach because Brian Kerbs, investigative journalist, beat them to the announcement. Since his blog post was released, Target had no choice but to go straight to playing defense for the company. In addition to apologies, Target offered any US consumers credit checks and identity theft protection paid for by Target for a year. If 10% of consumers opted into this service it would have costed Target $400 million in one year. Even if your credit card information was stolen, that’s a pretty solid “I’m sorry” gift.

The breach was not so humorous, but Target, four years later, seems to have recovered from potentially the largest breach crisis in history. You don’t have to worry anymore. It is safe to continue your unhealthy shopping spree habits at your local Target.

Follow Taking a Look at Crisis Communications on WordPress.com